Is the United States ‘exceptional’? 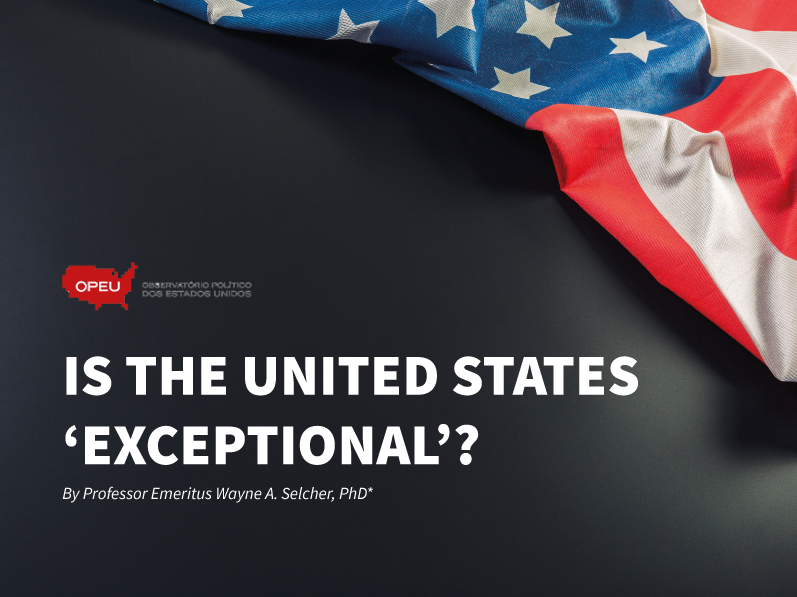 The Concept of Exceptionalism in National History

Debates over issues of national identity have been constants in American history, up to and including today, with the Civil War being the most notable and violent example of serious disagreement about national identity and unity. There are many interpretations of how the country came to be, what its defining characteristics are, and how factual or merely self-congratulatory the elements of the nationalistic claims of exceptionality really were or are now. Like any nationalistic tenet, the exceptionality thesis certainly requires a deliberatively selective and incomplete understanding of the national history. Whole university courses and disciplines of study in American Studies could be devoted to this contentious topic in its broadest sense. The characteristics and conclusions set forth below are not definitive, or exclusive, but are important for foreign students of the United States to take into consideration when trying to understand the formation of the country and the effects of that process today. This essay is meant as a comprehensive introductory overview from an empirical comparative politics and society standpoint. Many links to a wealth of high-quality cost-free online sources in English are offered to assist interested persons who wish to analyze further some aspects of the contemporary situation of the United States in a comparative context.

History of the Concept of “Exceptionalism”

The United States has been the single most influential country in the world since 1945 and has claimed to exercise world leadership since then. The existence of that leadership, its internal contradictions, and its acceptance or rejection by other countries have significant roots in American values, attitudes, and interests, many of which are not widely shared in other countries. The United States was founded by freedom-seeking immigrants deliberately trying to be different from their European homelands– no aristocracy, king, emperor, or state religion. National identity emerged out of a belief system in a country of immigrants, instead of being based on an ethnic origin, as in most of Europe. This national ideology became known as “Americanism” or “The American Creed.” The American Creed, according to Seymour Martin Lipset, in his classic 1996 book American Exceptionalism: A Double-Edged Sword, “can be described in five words: liberty, egalitarianism, individualism, populism, and laissez faire.” Lipset noted that such “exceptionalism” has both positive and negative characteristics and consequences, as will be demonstrated below. “Exceptionalism,” as an awareness of U.S. differences from Europe, eventually became one of the components of American nationalism and affects how Americans perceive the world and their role in it. The concept and national motto since 1782 of “E Pluribus Unum” (“Out of many, one”) symbolized the attempt to assimilate diverse ethnicities into a single nation, for many years optimistically referred to as a “Melting Pot” of peoples, now a contested phrase and goal.

The full text of this publication is available via Observatorio Politico dos Estados Unidos.

Wayne A. Selcher, Ph.D. is Professor of International Studies Emeritus, Department of Politics, Philosophy, and Legal Studies, Elizabethtown College, PA, USA. His major academic interests are Comparative Politics, US Foreign Policy, Latin American Politics and Foreign Policy (especially Brazil), and Internet use in international studies teaching and research. He is the creator and editor of the WWW Virtual Library: International Affairs Resources, a web guide for online international studies research in many topics.